This module contains unpublished documents from Humboldt’s papers, held primarily in the Berlin State Library and the Jagiellonian Library in Krakow. Through five thematic sections, the edition offers insights into Humboldt’s research practices before and after his travels. It documents ways in which he collected data and connected different areas of inquiry with each other.

Humboldt started his investigations in the field of plant geography by asking questions about the connection between the history of plants and that of mankind. During his American journey, Humboldt developed the concept of plant physiognomy: Main morphological forms determine the character of different types of vegetation. In the “Tableau physique des Andes et pays voisins”, which was also designed during the journey, the geography of plants is part of a global geoscientific research project. During the 1820s, Humboldt developed the numerical method of botanical arithmetic. This concept, as well as the–ultimately abandoned–project of a new edition of his “Essai sur la Géographie des plantes”, were part of a broader vision of plant geography on a global scale.

Humboldt’s papers contain numerous unpublished manuscripts and correspondences (including those with Karl Ludwig Willdenow and Carl Sigismund Kunth) on plant geography, which were published in 2016–2018 in the edition humboldt digital. A curated selection will be published in 2020 as Volume 1 of Series III "Forschungen im Umfeld der Reise" of the edition humboldt print entitled Geographie der Pflanzen: Unveröffentlichte Schriften aus dem Nachlass.

How did Humboldt motivate and influence contemporary research trips?

Virtually all traveling naturalists of the time referred to Humboldt and his travel account. Humboldt, in return, advised and supported many travelers. Research institutions compiled travel instructions, which also corresponded to Humboldt’s ideal of comprehensive collection and note-taking practices. At the same time, however, the natural sciences – and travelers with them – were becoming increasingly specialised. The result was a tension between (Humboldt’s) ideal of traveling and how travel was being practised, which Humboldt and others saw critically and commented on.

How did the relationship develop between the travelers and the scholars, administrators and curators who stayed at home?

Due to an increasing separation between researchers who collected data in the field and those who scientifically evaluated the objects and data at home, Humboldt often communicated between travelers and their patrons, pre-published findings on behalf of absent researchers and mediated the exchange, lending and sale of collection objects throughout Europe. In this sense, the thematic section Scientific Travels is connected to the history of objects and follows the traces of Humboldt’s work as a mediator – for example in Berlin collections.

Christian Gottfried Ehrenberg’s Diary of the Russian-Siberian Journey with Humboldt (1829), which contains numerous references to zoological and botanical specimens sent to collections in Berlin and Paris, has already been published in 2019 as part of the edition humboldt digital.

During his American journey, Humboldt recognized a connection between aesthetics and science. His correspondence with Johann Moritz Rugendas shows how he communicated his concept to a new generation of landscape painters traveling to America.

Adolph, Hermann and Robert Schlagintweit’s trip to India and the Himalayas (1854–1858) was the last scientific project Humboldt supported by means of his reputation and influence. The brothers undertook their expedition at a time of profound epistemological transformation in the areas of field research and the study of foreign cultures. Humboldt’s correspondence with the Schlagintweit brothers documents a paradigm shift in media history from natural painting to photography. The extensive collections of the Schlagintweits were initially intended, with Alexander von Humboldt's support, for a planned Indian Museum in Berlin's Monbijou Palace, but soon became the object of dispute between British colonial authorities and the Prussian museum administration.

The knowledge of the earth

He compared the structure of the earth’s crust as well as the strike and dip of mountains and volcanic arcs across the globe to establish common patterns and understand the laws of nature. Humboldt pursued the same goal in his investigations of the atmosphere and the global distribution of mean temperature zones.

Humboldt's papers in the Berlin State Library contain numerous unpublished manuscripts, which can shed new light on Humboldt's geognostic hypotheses: Immediately after the American Journey he carried out chemical experiments on the composition of the atmosphere with Louis-Jacques Thénard and Joseph Gay-Lussac (“Absorption de l’oxygène par les terres humectées”; “Expériments sur l’air atmosphérique”, Papers Large Box 8). These experiments can be seen as a continuation of his observations on air purity and the assumed connection with the spread of epidemic diseases (especially yellow fever), which Humboldt had recorded a few months earlier in New Spain and Cuba (“C'est mon cahier de la Havane intitulé sur la salubrité de l'air”, 28 fols., Vol. 1 of the Krakow Papers).

Following the Russian-Siberian journey, Humboldt intensively dealt with the geology and climatology of the Asian continent. A first result was an Academy lecture held in January 1831 in Paris, entitled “Sur quelques phénomènes physiques et géognostiques de l'Asie au nord de parallèle de 50 degrés” (Papers Large Box 5), which will be published for the first time in the edition humboldt digital. Here, too, Humboldt's research reveals itself to be a science on the move: “La description du globe n'est point une science stationnaire” [The physical description of the Earth is not a stationary science].

Cartography and the history of discovery

During his American journey Humboldt refined geographical knowledge of the continent through astronomical positioning and first cartographic preliminary drawings.

The two atlases of the American travel account are based on earlier map series by American and European cartographers, which Humboldt used as points of reference. While working on his atlases, Humboldt was in contact with American (José Manuel Restrepo, Joaquín Acosta) and European (Adrian-Hubert Brué, Pierre Lapie, Jean-Baptiste Joseph Delambre) cartographers, draughtsmen and engravers.This exchange is richly documented in Volume 7 and Volume 8 of the Krakow papers and will be comprehensively covered in this thematic section.

As a historian of the geographical exploration of the American continent by Europeans, Humboldt recognised the value of the early modern maps of America as historical sources. His investigations into the history of cartography, as documented in the manuscripts and sketches of Volume 9 of the Krakow papers, are another focus of the thematic section. 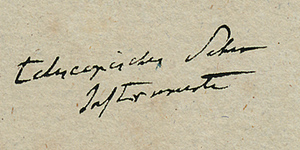 History of Globalization and Anthropology

“All are in equal measure ordained for liberty”

Documents, transcripts, notes and correspondence regarding a "history of the world view", as Humboldt himself names various envelopes, can be found especially in the Large Box 8 of the Berlin papers. It contains materials on the natural philosophy of the Egyptians, Greeks and Chinese, on the prehistory of the Phoenicians, on the history of Sanskrit and Indian philosophy as well as on the early history of globalization in the context of the European conquest of the American continent.

Humboldt’s historical interpretation of the age of European discoveries and the early phase of Ibero-American colonialism has also left its traces in the Krakow estate. Adding to the materials from the thematic section on the history of discovery and cartography, Humboldt proves to have a scholarly interest in American linguistic diversity. Here, the research interests of the two Humboldt Brothers correspond. Alexander collects materials on North and Mesoamerican linguistic and cultural history as well as information on the archaeology of early American civilizations, which he then compares to the history of the so-called Orient (above all Egypt) and the cultures of East Asia.

In the first volume of his Kosmos, Humboldt coined a now well-known sentence that emphasized the unity of the human race: "In maintaining the unity of the human kind, we at the same time repudiate all the unsatisfactory assumptions of higher and lower races of men. There are races of men more flexible, more highly polished, through mental culture more ennobled, but none naturally more noble. All are in equal measure ordained for liberty; for liberty which in ruder conditions of society appertains to the individual, which in more polished state, in civil life and among men in the enjoyment of political institutions, is the right of the community." Humboldt’s findings on the cultures of humankind, as expressed for example in the Vues des Cordillères et monumens des peuples indigènes de l'Amérique published in 1810–1813, as well as his studies on slavery and the plantation economy, which were initiated in particular by his experiences on the American journey, are oriented towards this conviction. Both the Krakow (especially volumes 1–3) and Berlin papers (especially Large Box 2 and Large Box 13) are an indispensable source for this research focus.